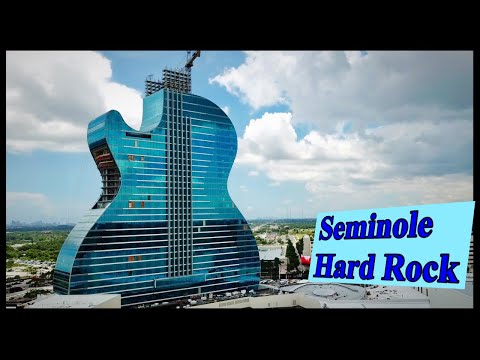 Was just down in Ft. Lauderdale this weekend and got a chance to visit Seminole Hollywood HardRock. Overall, a fantastic room and would definitely go back. However, I'll break it down into specific segments because some aspects were better than others.
** The Room **
The poker room itself is gorgeous. It looks like something out of Casino Royale. Very nice lighting, (marble?) floors and walls, non-smoking (but with a patio for smokers), smells nice, clean bathrooms. You can tell they put a lot of attention to detail. The reason I mention these things is because not everywhere is like that. Seminole HardRock in Tampa has a darker kind of lighting and theme. The casinos I go to here in Michigan are usually very smoky.
One thing I will say is the room is a little tucked away. I would have preferred if it was closer to the table games. Although, it is in the mall part of the hotel. There are tons of nice shops, bars, and even a dance club right next the poker room. So the room gets an AA rating from me.
** Dealers, Floor and Service **
The dealers were a mix of competent and incompetent. I'd say half of them were perfectly professional, the other half needed some improvement. I played 3 sessions for a total of 7 hours, and had something like 6 misdeals. A few times the dealers did a very bad job of keeping the action in order. I was playing Holdem the 2nd night, and the guy to my right kept acting out of turn. I raised his river donk lead and he insta-folded even though there was another player left in the hand (obviously he wants the other guy to call to see if I was bluffing). After the hand was over I asked the dealer, "you gonna do anyting about this?" because it was the 5th time he'd acted out of turn. The dealer literally shrugged. And that wasn't the only session where players were acting out of turn and the dealers weren't doing much proactively about it. Dealers get a JJ rating. Good enough, but wouldn't place too much faith in them.
The floor got involved twice when I was there, and I think they handled it perfectly. First time was on holdem. Guy posts his small blind, gets dealt in, gets up to go get food, and the dealer folds him since he wasn't at the table. Guy gets mad, floor comes over, calmly explains that you will get mucked if you're not at the table, and moved on. Second time was at PLO. Guy opens, I 3bet KKds, a guy who limped starts pushing forward calling chips and the opener immediately says "POT". The guy was going to call pulls his chips back trying to save himself 60 bucks. The dealer says no, that stays in. Cue argument. Floor is called, and says, you have complete your action. Flustered, the guy decides to repot instead lmao. But yeah they handled it very well. Floor gets an AK rating: very slick.
I gotta say, the drinks were expensive. Like $18 for a vodka-redbull (can not included). $10 for a beer. Maybe that's normal price down there, but seems like a scam. The waitress staff were all thicc, and were wearing push-up dresses and mini skirts. Which was distracting in a good way. The service staff gets a 69s rating from me: pretty to look at, not much value.
** The Players **
The players are action action action. Not as good as some of the home games I go to, but fuck do these fucks like to gambol. However, a lot of them have little to no manners. I got slow rolled twice in marginal pots for no apparent reason. One guy shoves a king high flush draw on the turn, binks the river, and then gets up and starts gloating to the other player. He sits down and says to the dealer, "I knew there was a reason why you good looking" and the dealer just looked uncomfortable lol. A lot of aggressive table talk too. That, along with how people drive, leads me to believe being assholish is just a part of the culture. So the players get a T9s rating: love to play 'em, but don't take 'em seriously.

Writing 'Native Americans' Into Popular Fiction: A Fan Perspective on the 'American School of Magic'

Recently, J.K. Rowling had this to say on the American school of magic.
Apparently the school has "relevance" to the "Native-American-Indian culture", "the name is of immigrant origin", and "indigenous magic was important in the founding of the school". Rowling also claimed, "if I say which tribes, location is revealed".
The first thing that concerned me is that Rowling used the term "American Indian" to refer to American tribes. However, the preferred term by U.S. natives is Native American, and in Canada, the tribes are known as First Nation peoples.
As I posted on another thread, it also concerns me that Rowling was born and raised as a British woman, with a British education. From what I know, she also lives in the UK, and only travels to the US seldomly. UK children, from my knowledge, are really not taught much about Native American tribes. That's more so American history. Even in the US, not much Native American history is taught in public (and private) schools, as much is focused on the "white narrative" of the country.
To compare myself to Rowling, I am a born American, with a similar education and upbringing to Rowling (college-educated white female), and most Native American history was scant in school. It had to be learned more so in college (American or Native American History). It's probably more likely that an American would know more about Native American history than a British person.
Even then, for anyone who knows anything about Native American history, it is clear that the past relations between Natives and white "immigrant" settlers (colonials) has been a long, bloody one, fraught with mistrust and warring. From the time that English settlers stepped foot at Roanoke (Virginia), and later Jamestown (Virginia) and Plymouth (Massachusetts), this has been so. The aptly named "French and Indian War" is evident of this as well, and that's not even counting later battles, such as Custer's Last Stand. For a very long time, Native Americans have been deceived, forced out, mistreated, mocked, and even killed by "immigrant" white settlers.
In the end, those Natives that resisted the US Government's attempt to drive them off their lands were hunted and killed (see Battle of the Little Bighorn, just one example among countless others), and the rest forced on to reservations - often times, land that not many wanted.
Even today, a great majority of Native Americans live on reservations, forced into poverty, poor education, and few options. There is one exception, the Seminole Tribe of Florida, which I will get to below.
To sum up my concern, Rowling is taking a huge risk to herself (and the Harry Potter series and world) by introducing a school of magic "founded with Native American magic, but with an immigrant name". It is already questionable for her to introduce such a connection, due the fact that she is British-born and raised, with no known Native American ancestry to boot. Should she forgo consulting Native American history experts, tribesmen, and elders, the use of Native American names and/or symbols by a non-native author may prove a harmful form of ethnic stereotyping. That, in turn, would promote misunderstanding and prejudice, which contributes to other problems faced by Native Americans today.
As a LOTR fan would put it, "One does not simply write about Native Americans in popular fiction". Especially when it is a "wizarding school with an 'immigrant' name".
One prime example of why this should not be done is Stephenie Meyer's Twilight Saga books and films, which controversially uses the Quileute, Makah, Ticuna, and Mapuche native American tribes.
Meyer's work and portrayal of such tribes has also been heavily criticized by Native Americans in various articles, some of which you can read here, here, and here.
Stephenie Meyer is American, and even she didn't get it right. While the popularity of the Twilight Saga brought fresh blood and money into La Push, the main town on the Quileute reservation, it is a temporary solution to a widespread problem (reservation poverty) that needs a permanent fix.
For example, Native Americans are, unfortunately, one of the poorest minorities (in both wealth and education) in America. The sole exception seems to be the Seminole tribe in my home state of Florida, which was not only never defeated by the US military, but owns and operates the multi-million (billion?) dollar, international Hard Rock casino franchise.


For one, I would certainly hope that the school of magic, if it does have "indigenous magic", does involve the Seminole Tribe in its founding. Logically, the Seminole Tribe would be one of the only tribes (if not the only tribe) rich and influential enough to even fund such a school of magic, especially into the modern day. Rowling also mentioned "tribes", as in "more than one tribe", and technically, the Seminoles are just that. According to Wikipedia, the Seminole tribe "emerged in a process of ethnogenesis out of [different] groups of Native Americans, most significantly Creek from what are now northern Muscogee".
As the Seminole tribe have a branch in Florida - including influence via the Hard Rock casino franchise in Orlando, the home of the first WWOHP - it is the tribe that makes the most sense for Rowling to write on. From my knowledge, Rowling did visit Florida (Orlando) at least once in the past while the original WWOHP was being constructed. It would be easy for her to take a detour to the local Hard Rock Cafe - located in CityWalk, in front of Universal Studios/Islands of Adventure/WWOHP - or even to the Seminole reservation itself.
tl;dnr: Rowling is opening a rather large can of worms and taking a huge risk in including an American school of magic with "an immigrant name, but Native American founding/influences"; the Seminole Tribe is a possible candidate for the "tribes" mentioned by Rowling.
As an added note, I may get downvotes for this, but it is fact that, whenever someone not of Native descent tends to write about Natives in any way in popular fiction, it has a large potential to stir up controversy. Controversy that may not be good for the Harry Potter franchise as a whole.